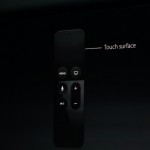 SAN FRANCISCO—The Apple TV just got its first big update since March of 2012, and it’s a substantial upgrade for both hardware and software. The fourth-generation box should be much faster, and it will use that extra speed to run apps and games from its all-new app store. It also comes with a redesigned remote control to improve navigation, which has long been one of the Apple TV’s weak points. 13 more images in gallery The new remote control has a glass touch surface, and a button that allows access to Siri. While the touch surface lets users scroll through movies and shows, Siri lets customers find content from iTunes, Netflix, Hulu, HBO, and Showtime, using their voice. “The TV experience itself hasn’t changed much in decades,” CEO Tim Cook said. “We believe the future of television is apps.” Read 7 remaining paragraphs | Comments