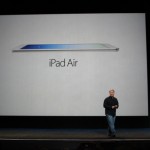 The big iPad just got a little smaller. Apple has just announced the fifth-generation version of its 9.7-inch flagship tablet, and as expected the tablet has gotten its first major design overhaul since the iPad 2 came out in early 2011. It’s now the “iPad Air.” The device will be available on November 1, and the entry level 16GB price will start at $499 for Wi-Fi only, and $629 with cellular data capabilities. The large iPad will be getting a tidy performance boost from Apple’s new 64-bit A7 SoC, which made its debut in the iPhone 5S. Apple is promising an 8x improvement in CPU performance and a 72x improvement in GPU performance over the original iPad. The device also gets its Wi-Fi upgraded to MIMO technology, gaining multiple multiple antennas provide to transfer data at up to 300Mbps over 802.11n. Read 2 remaining paragraphs | Comments