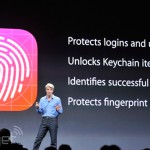 Guess what folks! With iOS 8 Touch ID will finally be useful for something besides unlocking your phone and buying apps. During the big keynote at WWDC 2014 Apple announced the debut of an API for TouchID. That means other apps will be able to use the fingerprint scanner on your iPhone for authentication. Your actual fingerprint data is still stored securely on the hardware, and is never actually exposed to developers. That means you could quickly and easily order a bombproof case for your precious phone just by holding your thumb across the home button and never worry that a bug in the Amazon app could expose your fingerprint to nefarious actors. That should relive some of the pain associated with keeping all your various accounts secure — which, as you’ve been told countless times, should all have unique passwords with a mixture of letters, numbers and special characters. Android users may have in-app access to LastPass , but simply scanning your thumbprint seems that much easier. Filed under: Mobile , Apple Comments

Read the original:
Apple will let you log into other apps with TouchID

A tough second in the markets