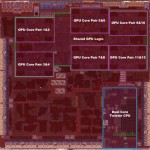 Enlarge / A die shot of the A9X. The ratio of GPU to CPU is becoming pretty insane. (credit: Chipworks via AnandTech ) Apple makes interesting chips for its mobile devices, but it doesn’t talk about them much aside from extremely high-level relative performance comparisons. That means it’s up to experts like the ones at Chipworks to open them up and figure it out, and they’ve partnered up with AnandTech to dig into the A9X in the iPad Pro. The most significant news is about the GPU, which is a 12-core Imagination Technologies PowerVR Series 7XT design. The company doesn’t generally offer a 12-core design, as shown in the chart below, but the architecture is designed to be easily scalable and it wouldn’t be the first time Apple had gotten something from a supplier that other companies couldn’t get. The standard A9 in the iPhone 6S and 6S Plus uses a 6-core version of the same GPU. Apple feeds that GPU with a 128-bit memory bus, something that it’s also included in other iPads to boost memory bandwidth and GPU performance. The Series 7XT lineup. The iPad Pro’s GPU falls somewhere in between the stock 8-cluster and 16-cluster designs. (credit: Imagination Technologies) Imagination’s chart for the Series 7XT GPU puts a hypothetical 12-core design in the same general performance neighborhood as an Nvidia GeForce GT 730M, a low-end discrete GPU that’s a bit slower than the stuff Apple is shipping in its high-end MacBook Pros. Our own graphics benchmarks place it a bit higher than that, but as some of you have pointed out , iOS may have a small advantage in some of these tests because of differences between the mobile OpenGL ES API in iOS and the standard OpenGL API used in OS X. Read 2 remaining paragraphs | Comments

Read More:
Apple’s A9X has a 12-core GPU and is made by TSMC

How ILM made you believe this painting was a real hangar...