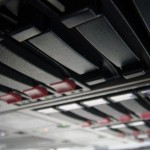 dariorug Apple’s long-rumored content delivery network (CDN) has gone live in the US and Europe, delivering traffic directly to Comcast and other Internet service providers thanks to paid interconnection deals, Frost & Sullivan analyst Dan Rayburn reported today . The CDN can deliver multiple terabits of data per second and will help Apple more efficiently distribute new releases of iOS and OS X. Apple is still using Akamai and Level 3 CDN services for iTunes and app downloads, “but over time, much of that traffic will be brought over to Apple’s CDN,” Rayburn wrote. “It’s too early to know how much traffic will come over and when, but Apple’s already started using their own CDN much faster than I expected. The pace of their build out and amount of money they are spending on infrastructure is incredible. Based on my calculations, Apple has already put in place multiple terabits per second of capacity and by the end of this year, will have invested well more than $100M in their CDN build out.” Apple has been working on its CDN for about a year. Read 10 remaining paragraphs | Comments

This House in Nazareth Offers Hints About Jesus’ Childhood Town