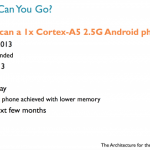 Basic smartphones are cheap—and getting cheaper. ARM Smartphone prices have been creeping ever downward in the last few years, and ARM is betting that they’re going to go even lower. AnandTech is reporting from ARM’s Tech Day today , and one of the company’s slides predicts that the cost of a phone with a single-core Cortex A5 chip in it will go as low as $20 within the next few months. Of course, these ultra-low-cost phones won’t be devices tech enthusiasts lust after. ARM notes that even a $25 phone like the Firefox handsets announced at Mobile World Congress  have to cut down on RAM and other specs to hit that price point, and it’s unlikely that something with such low specs could run something like Android satisfactorily. More expensive phones like the $179 Moto G will still be necessary if you want that full smartphone experience on a budget. Still, for those ever-important emerging markets where the smartphone has yet to take off, any OEM that can provide a decent experience for this price is going to fill an important niche. In other news from ARM’s Tech Day, ARM shared some new performance estimates for its upcoming 64-bit Cortex A53 and A57 architectures. The company predicts that chips based on these architectures will be about 1.5 times as fast as the Cortex A7 and A15 architectures they replace when the SoCs are all built on the same 28nm manufacturing process. When moved to a newer 20nm or 16nm manufacturing process, though, the A57 in particular will supposedly be nearly twice as fast as the older A15. Read 1 remaining paragraphs | Comments

View article:
ARM: The $20 smartphone will be possible “in the next few months”