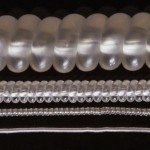 Fishing line of different diameters, formed into the coiled-coils used in these experiments. Science/AAAS Take a rubber band and twist it. Keep twisting it until it starts to collapse onto itself and form larger loops—it’s something you can do with almost any strand-like structure. Now, scientists from the University of Texas at Dallas in Richardson are taking advantage of this property in everyday materials such as fishing line and sewing thread and using it to make artificial muscles. The scientists took pieces of fiber that were a few hundred micrometers long and twisted them until they began to coil. As the pieces coiled, the twisted fibers became shorter and thicker; once tightly coiled, the scientists heat-treated them to prevent the fibers from unfolding. If heat is applied to the finished coil after this procedure, the individual fibers try to untwist. The untwisting causes the coils to expand in volume as they shorten in length, just like a muscle. The researchers found that if they made the fiber form larger coils in the same direction as the initial twists, the fibers contracted. If the fibers were made to coil in the opposite direction from the twist, the fibers expanded. By combining large quantities of these twisted fibers, the team could produce artificial muscles with above-average characteristics. Read 3 remaining paragraphs | Comments

View the original here:
Artificial muscles made with fishing line 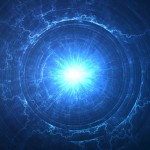