The ink is still fresh on Intel’s formal blessing of Thunderbolt 2 , and as promised, there’s already a product on the market from perennial early bird ASUS. The Z87-Deluxe/Quad ATX is the first motherboard to pack the tech, which combines four of the original 10Gbps Thunderbolt channels into two bi-directional 20Gbps ports. That’s four times the speed of USB 3.0 if you’re keeping score at home, allowing two 4K displays to be driven at once, or faster-than-SATA-6 SSD speeds, for instance. Otherwise, it’s as well-equipped as you’d expect from a bleeding edge mainboard, with 4th-gen Intel (Haswell) CPU support, 10 SATA-6 ports, 8 USB 3.0 ports, and 3 PCIe 3.0/2.0 x 16 slots. There’s no pricing or availability yet, though Thunderbolt-equipped motherboards tend to be expensive. Still, if you wear the “early adopter” name-tag with pride, hit the PR after the break. Filed under: Desktops , Peripherals , ASUS Comments Via: Legit Reviews 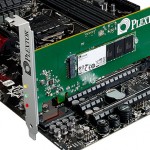