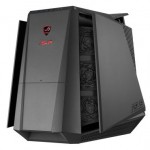 Didn’t snag one of the ROG TYTAN G30s ASUS announced in June? Don’t sweat it because the Taiwanese manufacturer has already one-upped itself, combining the transforming case of last year’s TYTAN CG8890 with the G30’s major features — water-cooled Core i7-4770K , one-touch overclocking, multi-monitor and surround sound support. Just for good measure, an available Nvidia GTX780 can replace the ’30’s GTX 680 . Sure, the G70 is Haswell-equipped, but that’s not nearly as impressive as activating “Turbo Gear” on it is: Push a button and the system overclocks, then its side and top panels extend outward automatically, exposing the rig’s 10 fans. How cool is that? As frosty as this tower’s innards we’d imagine. If that wasn’t enough to push you over the edge, it’ll wirelessly charge any Qi-compatible devices you might have as well. This beast of a rig should be available soon at retailers near you, but ASUS hasn’t provided pricing. We’re guessing it’s probably expensive — call it a hunch. Filed under: Desktops , Gaming , ASUS , NVIDIA Comments Via: PC Perspective Source: Republic of Gamers

Cops Are Raiding Homes of Innocent People Based Only On IP...

Facebook updated its Graph Search feature today to include posts and...