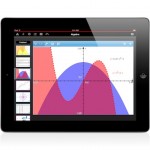 A TI-Nspire’s functionality, replicated on an iPad. TI/TechPoweredMath Texas Instruments has brought its graphing calculator functionality to a more modern platform, according to TechPoweredMath . TI-Nspire for iPad mimics the functionality of the color TI-Nspire calculator and has cloud integration for teachers to share files with students. TI’s graphing calculators have been stuck staunchly in the past as much as possible.  Color screens were  a recent development for its most popular line of devices, and developers have had to build games with only a handful of kilobytes of code . As smartphones and tablets rise in popularity, it makes increasing sense to fold the graphing calculator functionality into devices that students are likely carrying around with them anyway. This is not to say graphing calculator apps haven’t existed for some time—they have, for both smartphones and tablets, and many are free. But until now, TI has refused to cross over. Read 3 remaining paragraphs | Comments

Read this article:
At long last, TI releases graphing calculator for the iPad

How to Choose Your Next Android Phone: 2016 Edition