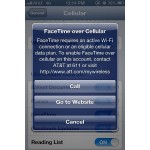 It’s been a slow process, but AT&T is gradually making FaceTime over Cellular (Apple’s video chat service) available to more people. The feature was introduced with iOS 6, but it was up to carriers on how they wanted to implement the service — if at all. AT&T chose to offer it to only shared data customers at first, to ensure that the carrier’s network could handle the additional load. Finally, the top GSM operator in the US has announced that it will now allow the feature on all tiered data plans, and it should be rolling out to customers over the course of the next two weeks. There’s still no word on grandfathered unlimited plans, but don’t get your hopes up on that happening any time soon. To get the full explanation, head to the source link below. Filed under: Cellphones , Mobile , Apple , AT&T Comments Via: TechCrunch Source: AT&T