AT&T is now accepting smartphone trade-ins as vouchers toward new phone purchases on its network, according to a press release from the company in Monday. Customers who bring in old smartphones can receive “at least $100” off of a new smartphone. Even better, the discounts are stackable, even off-contract. In the event that customers are looking to get a new phone that costs $99.99 or less, a traded-in smartphone will get them that phone for free. Trade-ins can be valued at more than $100 and can be applied immediately to an in-store purchase. Customers may also opt to trade their phone in online, though they will have to wait four weeks for approval and their “Promotion Card” to come in the mail with the credit. In the press release, AT&T does not explicitly state whether the credits apply only to phones that are purchased on a new two-year contract or whether the credits are able to be applied to off-contract purchases. Still, the language of the press release seems to favor that scenario and an AT&T spokesperson told Ars that the trade-in discounts do stack and do not require a new contract. So if you bust up your current phone but complete a scavenger hunt for five functioning old smartphones, you might save yourself a little money. Read 1 remaining paragraphs | Comments 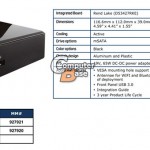