US telecom providers have a pretty bad rap, and today we’re finding out that some AT&T customers ended up paying money they shouldn’t have thanks to some scammers. The FCC just released a statement noting that it reached a settlement with AT&T in which the carrier will pay $7.75 million after it accidentally allowed scammers to charge $9 a month to unsuspecting wireline customers for a “sham” directory assistance service. Adding insult to injury, it seems this service was set up as a tool to help launder money; the scam was originally uncovered by the DEA. AT&T said in a statement that “two companies that engaged in a sophisticated fraud scheme were apparently able to circumvent those protections and submit unauthorized third-party charges that were billed by AT&T.” According to the FCC, AT&T received a fee each time this fraudulent service appeared on a customer’s bill, but the so-called service provider never actually provided anything to these customers, most of which were small businesses. Out of the $7.75 million AT&T is paying up, $6.8 million will go towards refunds and a paltry $950, 000 will go to the US treasury as a fine. Given that AT&T pulled in $40.5 billion in revenue in its most recent quarter, it’s a stretch to call that fine even a slap on the wrist. This is hardly the first time US telecom providers have gotten in trouble for such shady practices — in 2014, AT&T itself paid a much larger $105 million settlement for cramming false charges onto its customers’ bills. T-Mobile also paid $90 million in a 2014 settlement , while Verizon and Sprint paid $90 million and $68 million, respectively, last winter. We’re hoping the FCC continues to pay close attention to these shady practices. AT&T’s full statement is below: “Consistent with industry practices, AT&T wireline telephone customers have been able to purchase certain telecommunications services from third parties and have charges for those services billed on their telephone bill. We have implemented strict requirements on third parties submitting charges for AT&T bills to ensure that all charges are authorized by our customers; indeed, those requirements go beyond the requirements of FCC rules and impose safeguards that the FCC proposed but never adopted. Nonetheless, unbeknownst to us, two companies that engaged in a sophisticated fraud scheme were apparently able to circumvent those protections and submit unauthorized third-party charges that were billed by AT&T.” “Today, we reached a settlement with the FCC to resolve all claims associated with these companies and the related charges. Pursuant to the settlement, we will provide refunds for all charges on behalf of these two companies going back to January 1, 2012. Affected former and current AT&T wireline telephone customers will receive these refunds via check within 90 days. We stopped billing for these entities as of June 2015 and will also cease wireline third-party billing for other third parties, with limited exceptions.” Source: FCC

Watching uranium emit radiation inside a cloud chamber is mesmerizing 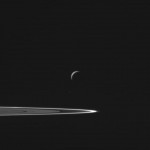 Cassini gets cozy with Saturn’s moon, flies 30 miles above its...