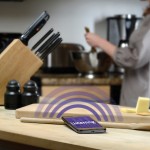 We’ll admit, the touchless controls on the Moto X have spoiled us. It’s far too enjoyable to jolt the smartphone out of a deep slumber by speaking a keyword-based trigger phrase (for the X, it’s “OK Google Now”) and commanding it to do our bidding. And while Motorola managed to integrate this feature into its flagship smartphone without taking a huge hit on battery life, there’s always room for improvement. Audience , a manufacturer of digital voice and audio processors that are commonly found in a large number of smartphones, is introducing its next-gen chip with VoiceQ, an always-listening feature the company claims is even more efficient and powerful than Moto’s X8 chipset. VoiceQ, much like its Moto X rival, will be continually ready and waiting for your trigger phrase (it’s “OK Audience” by default) and verbal commands. Your mileage may vary here, since it’ll be up to each handset maker to program those phrases and commands to their own satisfaction. The difference between the two devices, Audience tells us, is that VoiceQ not only uses a lot less power (less than 1.5mA) as it listens for you, it also doesn’t require you to pause between the trigger and the commands; you won’t find yourself speaking the same command twice just to ensure the phone heard the whole thing. VoiceQ isn’t the only enhancement to the next-gen chips , known as the eS700 series. It also comes with noise suppression for windy conditions, a type of speech-restoration tech that filters out extremely noisy situations and 48kHz voice processing. In other words, if touchless controls aren’t really your thing yet, at least your smartphone will be much clearer on the other end for whoever you call. Device manufacturers are already testing samples of Audience’s new chips, and company reps tell us that we can expect to see it show up in the second half of this year. Filed under: Cellphones , Wireless , Mobile Comments