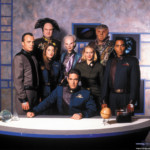 Babylon 5, even during its original run, was never particularly easy to watch when it aired. the changing TV landscape of the time, as well as the failure of B5’s original network PTEN and subsequent re-emergence on the TNT network, meant that timeslots and airdates shifted several times during the show’s five-year run. Show creator Joe Michael Sraczynski’s “B5 books” site is reporting that Go90.com now has the entire show available to stream for free for the first time, along with several other recent series. I’ve always believed that B5 represents one of the better Sci-Fi “space opera” TV shows in history, and one that many people were never able to watch during its run on television. The story and effects hold up extremely well for a show that recently celebrated its 20th anniversary. Now’s your chance to see it in its entirety on your own terms. Unfortunately, the site is US-only.

See the article here:
Babylon 5 now available to stream for free in the US