Online backup provider Backblaze is branching out today with a new business: an infrastructure-as-a-service-style cloud storage API that’s going head to head with Amazon’s S3, Microsoft’s Azure, and Google Cloud Storage. But where those services charge 2¢ or more per gigabyte per month, Backblaze is pricing its service at just half a cent per gigabyte per month. Backblaze’s business is cheap storage. We’ve written about the company’s hard disk reliability data a few times over the years ; the company has found that regular consumer hard drives are more than up to the demands of providing cloud storage, though there is substantial variation between the different manufacturers and models. Backblaze has designed (and documented ) its storage hardware for the lowest possible cost, using software to provide the necessary protection against failures. It currently has more than 150 petabytes of storage. This low-cost storage means that the company can offer its $5/month unlimited size backup plan profitably. Now the company plans to sell that same cheap storage to developers. Its new B2 product is very much in the same vein as Amazon’s S3: cloud storage with an API that can be used to build a range of other applications. And the price difference is significant. Amazon S3’s cheapest online storage—reduced redundancy, for customers storing more than 5 petabytes—costs 2.2¢ per gigabyte per month. Backblaze’s B2 storage costs 0.5¢ per gigabyte per month, with the first 10GB free. This is cheaper even than Amazon’s Glacier and Google’s Nearline storage, at 1¢ per gigabyte per month, neither of which supports immediate access to data. Bandwidth costs are the same; inbound bandwidth is free, outbound is charged at 5¢ per gigabyte. Read 3 remaining paragraphs | Comments

Read the original post:
Backblaze to sell cloud storage for a quarter the price of Azure, Amazon S3

Induced Stem Cells Will Be Tested on Humans for the First... 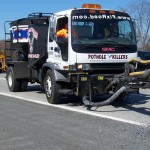 This Utility Truck Can Exterminate a Pothole Every 120 Seconds