In order to cut down on the number of trucks it puts on the streets, Brouwerij De Halve Maan is working with the city of Burges to construct an underground beer pipeline. While the brewing still happens at its original site, filtration, bottling and shipping operations were moved outside of town in 2010. To get the tasty beverages from point A to point B, dozens of trucks go back and forth each day, but not for much longer. Folks familiar with the Cleveland, Ohio-based Great Lakes Brewing Company may recall that it uses an underground system to send its suds from a production facility to a taproom/pub across the street. The effort in Belgium will be much more elaborate though, replacing the 3-mile tanker route with 1.8 miles of polyethylene pipe, and cutting transit time to between 15 and 20 minutes. De Halve Maan claims the system can send out 6, 000 liters per hour — on top of cutting traffic and reducing emissions. What’s more, the brewery (er, brouwerij) will foot the bill for installation and road repairs, reducing the financial burden on the city. [Photo credit: Bernt Rostad/Flickr] Filed under: Transportation Comments Via: Wired , CityLab Source: Het Nieuwsbladsaid (Dutch)

World’s Only Sample of Metallic Hydrogen Has Been Lost 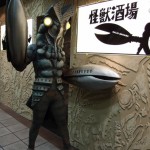 Get Drunk with Kaiju at This New Japanese Bar