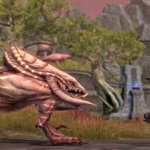 So far, Bethesda Softworks (and parent company Zenimax Media) has bucked industry trends by planning a $15 per month subscription for its upcoming The Elder Scrolls Online , adding a bit of insult to injury by including a real-money shop for nonessential items . Now the company says it’s trying to get Microsoft to agree to waive the additional requirement of an Xbox Live Gold subscription for Xbox One players, though without much success so far. Microsoft currently requires a $60/year Xbox Live Gold account to play any and all online games on the system, even otherwise free-to-play titles like World of Tanks . Speaking to the UK’s official Xbox Magazine , though, Zenimax Online Creative Director Paul Sage says the company has “been in talks with Microsoft” about getting a waiver for The Elder Scrolls Online  since the game already has its own subscription fee. “[We’re] seeing whether or not there’s any room to change their minds about that, for folks who are only paying The Elder Scrolls Online and don’t want to pay for an Xbox Live Gold subscription, just to pay The Elder Scrolls Online , ” Sage said. So far Microsoft has been less than responsive to these concerns, reportedly answering, “that’s the way it works, ” but Sage promises that Bethesda will “keep on pushing” on the issue. Read 1 remaining paragraphs | Comments