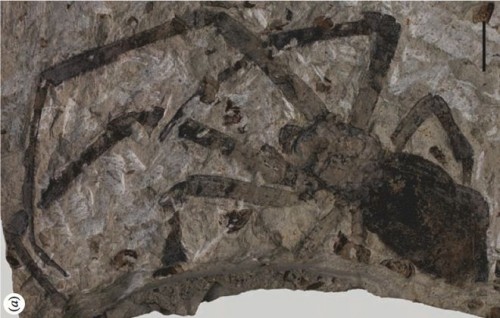 The fossil itself is not as big as this picture.

The spider, a new species called Nephila jurassica, stretches about two inches from end to end. It was found in a fossil-rich rock formation near Daohugou village in northeastern China. The fossil dates back to the Middle Jurassic, about 165 million years ago, researchers reported in the April 20 Biology Letters.

Spiders from the same family still exist today. Female giant golden orb-weaver spiders can grow to a whopping 4 or 5 inches in diameter (although males tend to be less than a quarter that size). These spiders are known for spinning huge webs of golden silk and have been known to trap bats and small birds.

Spider fossils are very rare, and this discovery leads scientists to believe that the Nephila genus is 130 million years older than previously thought. Link