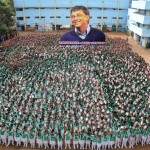 Microsoft co-founder Bill Gates is set to reveal a massive clean energy project on Monday, during the first day of the United Nations climate change summit in Paris. According to Reuters , which originally reported the news, the French government has confirmed that the ex-CEO-turned-philanthropist will launch the Clean Tech Initiative, a push to commit countries to double their budgets on clean energy tech research and developments by 2020. But Gates won’t be working on this multibillion dollar fund alone: The US, Australia, Canada, France, India, Indonesia, Norway, Saudi Arabia and South Korea will all be backing the plan, a person familiar with the matter told Reuters .