An anonymous reader writes “BitTorrent has come up with a new way to sell music. It’s called BitTorrent Bundle, and it puts the music store alongside the torrent. At last, someone has come up with a way to turn all us entitled, lawless downloaders into paying customers. BitTorrent thinks of BitTorrent Bundle as a sort of 21st century band flyer. Post a torrent with a handful of live tracks from your latest tour, Bundle it with a store that lets your groupies buy the full album.” Put simply, the idea is that bands publish a basic torrent with a few songs as a teaser. When users download that .torrent file from BitTorrent.com, they’re shown a page asking for something — money, an email address, or social media interaction — in exchange for the rest of the album (or other bonus content). If they comply, they get a different .torrent file. It’s not intended as a guard against piracy, but as a way to link up content creators with the torrenters who are actually willing to pay. Read more of this story at Slashdot. 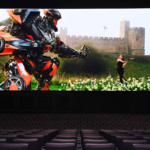 Samsung made a giant 34-foot LED TV for movie theaters