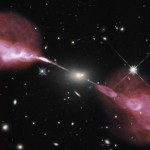 The shocked gasses of the micro quasar are structured in the same way as those of this actual quasar. NASA, ESA, S. Baum and C. O’Dea (RIT), R. Perley and W. Cotton (NRAO/AUI/NSF), and the Hubble Heritage Team (STScI/AURA) Black holes got their name because they have such intense gravity that, once inside their event horizons, not even light can escape. Somewhat ironically, they’re also some of the brightest objects in the Universe. That’s entirely because of things that happen outside of the event horizon. There, the hole’s intense gravity draws matter into a disk and raises it to very high energies. The disk emits lots of light on its own and sends out jets of high energy particles that emit even more as they interact with the surrounding interstellar material. But this process has a limit—literally called the Eddington limit. At some point, the radiation emitted by the black hole starts driving off the surrounding matter, effectively cutting off its own food supply. You can view the Eddington limit as the point where matter intake is optimal; below it, the hole can swallow more than the environment’s feeding it, while above, matter is being driven off before it can be eaten. Now, thanks to new observations of a black hole in the Southern Pinwheel galaxy (Messier 83), researchers have found that the Eddington limit isn’t an absolute cap on the amount of energy a black hole can emit out into its surroundings. Their observations suggest that this particular black hole sends out almost as much energy in the form of accelerated particles. Read 7 remaining paragraphs | Comments

Here’s how Windows 8.1 Update tries to give you the right...