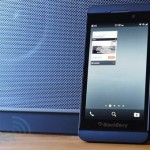 BlackBerry got off to a roaring start with with the Z10, which shipped a million devices in its first three weeks on the market and led many to predict there’d be at least 3 million shipped this quarter (the first full quarter of Z10 availability). That turned out not to be the case, as the company said during an earnings call for Q1 2014 that it managed to get just 2.7 million BlackBerry 10 OS handsets out the door, despite the Q10 having joined the Z10 on shelves for a good part of that period. Those figures make up just 40 percent of its handset numbers, meaning most of the 6.8 million phones it shipped consisted of cheaper last-gen products. They refused to break those numbers down between the Q10 and Z10, so that’s all we have to go on at this point — but taken with its announcement of an $84 million loss, it’s far from encouraging. Update: Apologies, folks. Our original headline said 2.7 million were sold, whereas in fact the figure indicates shipping numbers. The post itself is unchanged and accurate. For reference, BlackBerry’s actual sales to end users lagged behind shipments by around 30 percent when they revealed the previous set of figures back in March. Filed under: Cellphones Comments