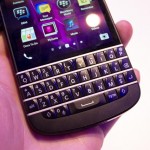 The BlackBerry Q10. Ars Technica On Friday, BlackBerry announced (PDF) its quarterly earnings. Compared to the previous quarter, the embattled Canadian handset maker seems to have slowed the bleeding. In just three months, it slashed its losses by a factor of 10. In its fourth fiscal quarter ending March 1, 2014, BlackBerry sustained a net loss of $423 million, down from a net loss of $4.4 billion the previous quarter . That harsh third fiscal quarter loss was a driver behind a terrible fiscal 2014 year overall for Blackberry: the company lost $5.8 billion from March 1, 2013 to March 1, 2014. “I am very pleased with our progress and execution in fiscal Q4 against the strategy we laid out three months ago. We have significantly streamlined operations, allowing us to reach our expense reduction target one quarter ahead of schedule,” said John Chen, the company’s CEO, in a statement. “BlackBerry is on sounder financial footing today with a path to returning to growth and profitability.” Read 5 remaining paragraphs | Comments

How to set up your own private instant messaging server