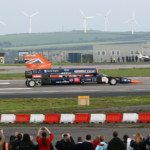 It’s finally happened. Nine years after the Bloodhound project was announced at London’s Science Museum , the supersonic car has completed its first test runs. At a closed-off airstrip near Newquay airport, Cornwall, the monstrous vehicle roared across the tarmac at roughly 200 MPH. That figure is a long way off the team’s ultimate goal of 763 MPH, however, and a new world land speed record. Eventually, the team hopes to crack 1, 000 MPH at the dusty Kalahari desert in South Africa. Before then, however, the team had to prove that the car was more than vapourware and broken promises. Today, the car relied on a Eurojet EJ200 jet engine for thrust. That on its own could take the car to 650 MPH. The final configuration will also have a rocket system provided by Nordic aerospace company Nammo. For the initial record attempt, the Bloodhound will use a single monopropellant rocket which can produce around 40kN of thrust. It will then be swapped out for a hybrid rocket system that, combined with the jet engine, can carry the car to 1, 000 MPH. In total, the vehicle will produce 212kN of thrust, which is eight times the power output of a Formula 1 starting grid. To install the rocket system, however, Bloodhound needs cash. Funding has always been a problem for the team in Bristol, which relies on sponsorship and fan donations to operate. The trial runs in Cornwall, then, serve two purposes; they’re a vital form of testing, giving the team valuable data and insight into the practicalities of running the vehicle. They are, though, also a marketing tool which the team hopes will attract the interest and, ultimately, the cash of a deep-pocketed investor. Without extra funding, the team will have to delay its record attempt in late 2018. Bloodhound is driven by Andy Green, an RAF pilot who set the previous world land speed record with the Thrust SSC in 1997. He’ll be piloting the vehicle both for the initial land speed record (the team hopes to hit about 800 MPH) and the 1, 000 MPH attempt. Bloodhound is a complicated and intimidating car to operate, measuring 13.4 meters and weighing roughly seven and a half tonnes. In Cornwall, however, Green seemed unfazed —excited even — as he clambered into the cockpit. We’re not surprised; he’s waited as long as the public to finally push the accelerator pedal. Here’s hoping it won’t be quite as long before we see Bloodhound run again. 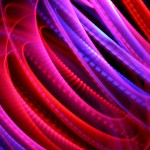 Corkscrew Lasers Are About to Revolutionize Internet Bandwidth