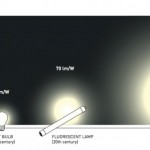 Nobel Prize Committee Each year, roughly a quarter of the electricity we generate goes to lighting. For decades, that lighting came in the form of an incandescent light bulb, which produced 16 lumens for every Watt it was fed. Fluorescent bulbs are roughly five times as efficient, but recent LEDs do nearly 19 times better than incandescents, producing 300 lumens for each Watt. The first LEDs date back to 1907, but it’s only recently that their incredible efficiency has been brought to bear on the lighting market. One of the key holdups was our inability to generate a broad spectrum of colors. Specifically, we couldn’t make white light because we lacked the ability to produce blue LEDs. Now, the Nobel Prize in Physics is being given to three materials scientists who overcame this roadblock. The people receiving the honor are Isamu Akasaki and Hiroshi Amano, both faculty at Nagoya University in Japan, and Shuji Nakamura, now of UC Santa Barbara, who did much of his key work while at Nichia Chemicals, a small company in Japan. Read 8 remaining paragraphs | Comments

New Alternatives To Silicon May Increase Chip Speeds By Orders of...

‘Rogue’ Algorithm Blamed for Historic Crash of the British Pound