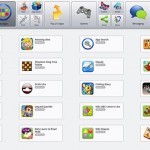 It’s been a year and change since BlueStacks announced a Windows 8 version of its App Player , which let you run most of your Android apps on the then-beta OS . Now the company has announced the official version, tweaked to play nicely with Redmond’s own Surface Pro and sporting a fresh, custom-built charm menu and start screen tile. You’ll now be able to run apps in “true” touch-enabled full-screen mode using your Win 8 tablet’s tilt/motion sensors, and everything will work faster, too. CEO Rosen Sharma also touted the release as a way for developers to bypass Microsoft’s “onerous” submission process to get Android apps onto the x86 Surface Pro, and you can’t argue with the price — it’s free, and available for download now. For more, head after the fold. Filed under: Cellphones , Desktops , Laptops , Tablets Comments Source: BlueStacks