An anonymous reader was one of many to point out that Boeing doesn’t want to rely on a sad devotion to an ancient religion to protect aircraft and conjure up the stolen data tapes, but plans on using force fields instead. “Boeing’s new patent may let the force be with you even in real life. The aircraft and defense company has taken a cue from science fiction with its plan to develop a Star Wars style force field that would use energy to deflect any potential damage. Just liking the luminescent shields seen in the film, Boeing’s “Method and system for shock wave attenuation via electromagnetic arc” could provide a real-life layer of protection from nearby impacts to targets. The downside: It won’t protect from direct hits.” Read more of this story at Slashdot. 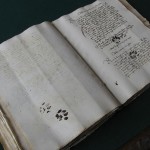 Connected Collar Lets Your Cat Do the War-Driving