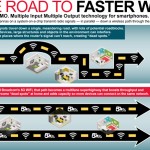 It’s great to have speedy 802.11ac WiFi in a smartphone , but the technology doesn’t always live up to the promise; busy hotspots and walls often slow it down. They may not be as much of a problem once Broadcom’s new BCM4354 system-on-chip reaches handsets, though. It’s the first mobile part to combine 802.11ac with 2×2 MIMO (Multiple Input Multiple Output) antennas, giving the wireless signal a more reliable path when there’s a lot of interference. In other words, you’re more likely to get close to the chip’s 867Mbps peak speed — Broadcom reckons that the hardware is up to twice as fast as a 1×1 MIMO design. Whether or not the BCM4354 is that quick in practice, you may not have to wait very long to try it out when the chip is already in production. Just who’s using it isn’t clear, but Samsung is boasting that the Galaxy S5 is the first smartphone to support 802.11ac with MIMO. We’ve reached out to Broadcom to check whether or not the 4354 is inside Samsung’s latest flagship, and we’ll let you know if it can confirm anything. Filed under: Cellphones , Networking , Mobile Comments Via: VentureBeat Source: Broadcom (1) , (2)

Scientist invents ice cream that changes color as you lick it