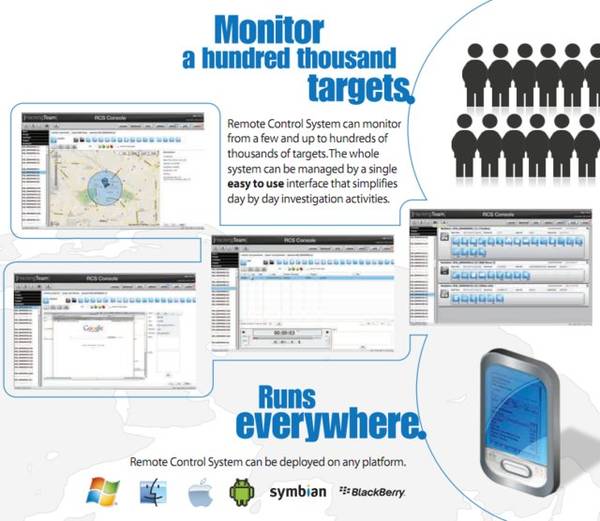 Ars Technica has a small gallery of the latest Wikileaks dump, consisting of brochures from companies that sell malicious software to governments for use in spying on their citizens. I spoke at length with one of the sources for these and we agreed that it was freakishly weird and scary — I’ve spent the past two months in a bit of a paranoid stupor as a result. On the other hand, I have seen enough product brochures to know that companies often stretch the truth when they’re pimping their products, and I wouldn’t expect truth-in-advertising ethics from vichy nerds that specialize in violating the UN Declaration of Human Rights.

One product marketed by HackingTeam is the Remote Control System, malware that infects computers and smartphones in order to enable covert surveillance. The company says that its trojan can intercept encrypted communication, including Skype voice calls. They prominently advertise the fact that the malware can be installed remotely. They say that it can scale up to monitor “hundreds of thousands of targets” and is capable of being deployed to Apple, Android, Symbian, and Blackberry mobile devices.

Gallery: how the surveillance industry markets spyware to governments

Read More:
Brochures from the companies that sell malware to governments