Buffalo just outed their new portable BDXL Blu-ray writer, the BRXL-PC6U2-BK. BDXL is the new Blu-ray spec that can store up to 100 GB on three layers and 128 GB on four. The burner can operate at speeds of up to 4x using dual USB 2.0 ports and 2x speed using only one.

The device is claimed to be the first portable BDXL Blu-ray burner on the market and will release later this month in Japan for about $286 — no word yet on a US release.

While this is certainly good news for the Blu-ray standard, 3-layer BDXL discs can cost about $57 apiece. I’m not so sure I’d want a portable drive writing on $60, write-once, discs. 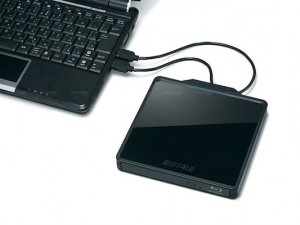