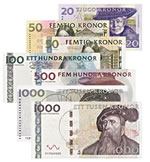 Got
cash? Not necessary in Sweden, who has gone (mostly) cashless:

Sweden was the first European country to introduce bank notes in
1661. Now it’s come farther than most on the path toward getting rid
of them. […]

In most Swedish cities, public buses don’t accept cash; tickets
are prepaid or purchased with a cell phone text message. A small but
growing number of businesses only take cards, and some bank offices
— which make money on electronic transactions — have stopped
handling cash altogether.

“There are towns where it isn’t at all possible anymore to
enter a bank and use cash,” complains Curt Persson, chairman of
Sweden’s National Pensioners’ Organization.

The upside? Crimes are down:

The number of bank robberies in Sweden plunged from 110 in 2008
to 16 in 2011 — the lowest level since it started keeping records
30 years ago. It says robberies of security transports are also down.

“Less cash in circulation makes things safer, both for the
staff that handle cash, but also of course for the public,” says
Par Karlsson, a security expert at the organization.

Continued here:
Cash is King, Except in Sweden