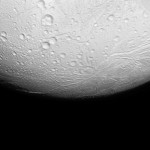 I carry an ocean in my womb. NASA/JPL/SSI/J Major Finding liquid water on a body within the Solar System is exciting. The only thing that is probably more exciting is finding an ocean full of it. Today such news comes via Cassini, which has made measurements that show that Saturn’s moon Enceladus has a hidden ocean beneath its icy surface. While orbiting Saturn in 2005, Cassini found jets of salty water spewing from the south polar region of Enceladus. According to Luciano Iess of Sapienza University of Rome, lead author of the new study published in Science , “The discovery of the jets was unexpected.” Geysers require liquid water, and we wouldn’t expect Enceladus to have any. It is too far from the Sun to absorb much energy and too small (just 500km in diameter) to have trapped enough internal energy to keep its core molten. The answer to how the water got there might lie in the details of the moon’s internal structure. Read 13 remaining paragraphs | Comments