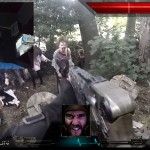 Chatroulette often brings surprises, but usually not good ones. However, several users were recently greeted with an amazing real life, live-streaming Doom-style first person shooter ( FPS ) game complete with undead characters and a creepy graveyard setting. To play, they talked the hero character through the scenes, giving commands like “Run! Run, fat boy, run!”, “Go for the head shot!” or “Check what’s in that pot!” The “game” was replete with sound effects, blood and guns, including a “rhino turret” and rocket launcher. The reaction of the players was beyond hilarious, with many adapting surprisingly quickly to the scenario (“Hit him again to make sure he’s dead!”). The UK production team from Realm Pictures released a companion making-of video, and it’s hard to believe they only spent £900 (about $1, 450) on the whole thing. There were video and sound effects experts who did their stuff on-the-fly, along with makeup people, a gun touch-up painter (they used nerf guns), and a cosplayer. The main actor wore a motorcycle helmet with a GoPro camera, light and Teradek HDMI transmitter. 30 intrepid extras from a nearby town played the zombies. The producers added plenty of on-the-nose FPS touches like overly-dramatic gun-cocking, comic health avatars and useless hand gestures. The show’s director, who also played the hero witih a Batman-style voice, tried to lead players into making the correct decisions. Many didn’t catch on, resulting in a gruesome death, but those with some experience in the genre eventually got to the final scenario, an encounter with the “Boss.” You’ll definitely want to see how that plays out below. Filed under: Gaming Comments Via: Reddit Source: Realm Pictures (YouTube) Tags: Chatroulette, FirstPersonShooter, FPS, live-action, livestream, omegle, RealmPictures, video