Enlarge / The catalyst in question. (credit: John Timmer) The carbon dioxide we’re currently dumping into the atmosphere started out as atmospheric carbon dioxide hundreds of millions of years ago. It took lots of plants and millions of years of geological activity to convert it to fossil fuels. One obvious way of dealing with our atmospheric carbon is to shorten that cycle, finding a way to quickly convert carbon dioxide into a usable fuel. Unfortunately, carbon dioxide is a very stable molecule, so it takes a lot of energy to split it. Most reactions that do so end up producing carbon monoxide, which is more reactive and a useful starting material, but it’s far from a fuel. Now, though, researchers have discovered a catalyst that, with a little help from light, can take CO 2 and make methane, the primary fuel in natural gas. While the reaction is slow and inefficient, there are a number of ways it could be optimized. Unexpected methane The work started out with a catalyst that converts carbon dioxide to carbon monoxide when supplied with a source of electrons. The catalyst is a complex ring of carbon-based molecules that latch on to an iron atom at the center. The iron interacts with carbon dioxide, allowing hydrogen atoms from water to break one of the carbon-oxygen bonds, liberating water. The iron loses some electrons in the process, and these have to be re-supplied for the cycle to start again. Typically, that supply comes in the form of a separate chemical that readily gives up some electrons. Read 10 remaining paragraphs | Comments 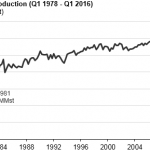 US coal production drops to levels not seen since a 1980s...