Enlarge / An artist’s rendering of an electric skate. (credit: The Boring Company ) On Wednesday, the city of Chicago opened a Request for Qualifications (RFQ) for an express train that would take passengers from the city’s O’Hare airport to downtown. The system would have to be completely privately funded—Chicago says no taxpayer money would be used for it. Elon Musk’s Boring Company—a tunneling company that the SpaceX and Tesla CEO started last year—will respond to the request. Musk hopes to get to the second round when bidding will take place. On Wednesday evening, he tweeted that his company “will compete to fund, build & operate a high-speed Loop connecting Chicago O’Hare Airport to downtown.” Musk’s reference to a “Loop” is explained more clearly on  The Boring Company’s FAQ page : “Loop is a high-speed underground public transportation system in which passengers are transported on autonomous electric skates traveling at 125-150 miles per hour. Electric skates will carry between 8 and 16 passengers (mass transit), or a single passenger vehicle.” Unlike Musk’s idea for a Hyperloop, a Loop won’t draw a vacuum. “For shorter routes, there is no technical need to eliminate air friction,” The Boring Company states. Read 6 remaining paragraphs | Comments 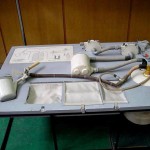 This Is What Astronauts Use to Poop in Space (Ew. Awesome....