colinneagle writes “Verizon’s 2013 Data Breach Investigation Report is out and includes data gathered by its own forensics team and data breach info from 19 partner organizations worldwide. China was involved in 96% of all espionage data-breach incidents, most often targeting manufacturing, professional and transportation industries, the report claims. The assets China targeted within those industries included laptop/desktop, file server, mail server and directory server, in order to steal credentials, internal organization data, trade secrets and system info. A whopping 95% of the attacks started with phishing to get a toehold into their victim’s systems. The report states, ‘Phishing techniques have become much more sophisticated, often targeting specific individuals (spear phishing) and using tactics that are harder for IT to control. For example, now that people are suspicious of email, phishers are using phone calls and social networking.’ It is unknown who the nation-state actors were in the other 4% of breaches, which the report says ‘may mean that other threat groups perform their activities with greater stealth and subterfuge. But it could also mean that China is, in fact, the most active source of national and industrial espionage in the world today.'” The report also notes that financially-motivated incidents primarily came from the U.S. and various Eastern European countries. Read more of this story at Slashdot.

Read the article:
China Behind 96% of All Cyber-Espionage Data Breaches, Verizon Report Claims 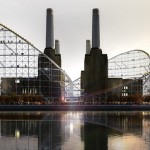 An Abandoned London Power Station Could Find New Life As a...