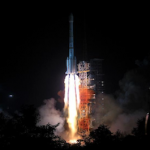 The China National Space Administration has launched Chang’e 3, a plutonium-powered lunar lander on-board at 185-foot-tall Long March 3B rocket. The lander is on a four-day trajectory for the lunar surface, and will brake and enter lunar orbit on December 6th. It is scheduled to land on December 14th, in the Bay of Rainbows (Sinus Iridum). The rover masses 140kg, with nuclear heaters to keep systems alive during the two-week-long lunar nights, and will use radar to probe the lunascape as it roves during its mission. It is also outfitted with high-resolution panoramic cameras and telescopes. The Chinese space program’s stated goal is to establish a space-station and autonomous landers that can return to Earth with samples. “On behalf of the Xichang Satellite Launch Center and the command headquarters, I would like to extend my gratitude to all those who have been part of the project,” said Zhang Zhenzhong, director of the Xichang launch base. “And my thanks also go to all the friends who have been helping us throughout the whole process. “The Chang’e probe is on the way to the moon. Of course, it’s a symbol of China’s national power and prowess,” Zhang said in post-launch remarks translated into English on China’s state-run television. Over the next few days, Chang’e 3 will adjust its path toward the moon three times to set up for a critical rocket burn to enter lunar orbit Dec. 6. Landing on the moon is scheduled for Dec. 14 in a region known as Bay of Rainbows, or Sinus Iridum, on the upper-left part of the moon as viewed from Earth. Many of the mission’s specifications and objectives remained secret until the week of launch, when China rolled out details in a press briefing and through official state-owned media outlets. The lander carries a bipropellant rocket engine designed to adjust its power level and pivot to control the probe’s descent from an altitude of 15 kilometers, or about 9 miles, according to China’s state-run Xinhua news agency. Long March rocket blasts off with Chinese lunar rover [Stephen Clark/Spaceflight Now]

Acer’s first laptop with a 4K display ships this month for...