While China had their Industrial Revolution rather late in the global game, their production might and speed means they’ll likely advance new digital fabrication techniques before the rest of the world does. For example, it’s been ten years since the American outfit Contour Crafting first proposed 3D printing houses, but aside from a brief surge of TED-Talk-inspired press in 2012, they’ve been mostly quiet. In that time, meanwhile, China has begun developing their 3D-printed-house-erecting capabilities in earnest. The Shanghai-based WinSun Decoration Design Engineering company recently printed ten sample structures of 200 square meters each. What’s amazing is that they produced the entire lot in less than 24 hours, and that the cost of each house is less than US $5, 000. The concrete-like building material comes “entirely out of recycled materials [and is] a mixture of construction and industrial waste” which the company claims is environmentally friendly (although they don’t provide specifics on the material). (more…)

Twitter Sued For $50M For Refusing To Identify Anti-Semitic Users 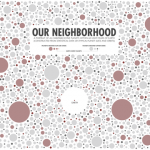 All the Habitable Planets Within 60 Light-Years of Earth, Visualized