Buildings in China are shrouded in smog. From a report: China has implemented an unprecedented pollution crackdown in recent months as the country shuts down tens of thousands of factories. The effort is part of a national effort to address China’s infamous pollution and has affected wide swaths of China’s manufacturing sector. In total, it is estimated that 40 percent of all China’s factories have been shut down at some point in order to be inspected by environmental bureau officials. As a result of these inspections over 80, 000 factories have been hit with fines and criminal offenses as a result of their emissions. Safety officials have been moving from province to province (30 in total so far) shutting down factories as well as electricity and gas as they inspect the factories for meeting emissions requirements. This has resulted in late and missed orders, increased costs, and could ultimately result in higher prices on US shelves. Read more of this story at Slashdot. 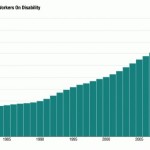 The Startling Rise of Disability in America