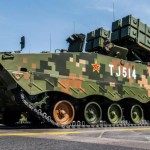 The BBC reports on China’s use of a “digital camo” —a pixelated look believed to offer superior concealment than traditional patterns—so exaggerated it resembles the video game Minecraft. (The United States deployed a less aggressive digital camo , but is phasing it out. )