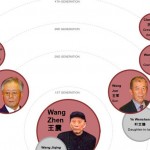 This long-read from Bloomberg about China’s “Princelings” — the generation of hyper-rich oligarchs’ children, descended from Mao’s generals — is endlessly fascinating. Wealth in China is even more concentrated than Russia, Brazil or the USA, and the Chinese looter-class use complex screens that take advantage of different ways of representing their names in English, Cantonese and Mandarin to obscure the ownership of former state assets, flogged at pennies on the dollar in sweetheart deals for the hyper-privileged. The Princelings are western-educated, mostly in the USA, and flaunt expensive luxury-brand accessories on their social media profiles. The accompanying interactive graphic lets you explore the intertwining relationships between the families of the “eight immortals.” Opportunities for the princelings surged in the 1990s after Deng kick-started another wave of economic changes. They jumped into booming industries including commodities and real estate as new factories and expanding cities transformed China’s landscape. Two of Deng’s children — Deng Rong, 62, and her brother, Deng Zhifang — were among the first to enter real estate, even before new rules in 1998 commercialized the mainland’s mass housing market. Two years after Deng Rong accompanied her father on his famous 1992 tour of southern China to showcase the success of emerging export center Shenzhen, she was in Hong Kong to promote a new development she headed in Shenzhen. Some apartments in the 32-story complex were priced at about $240,000 each, according to a front-page story in the South China Morning Post. Corporate records show that by the late 1990s half of the company was owned by two people with the same names as Deng Rong’s sister-in-law, Liu Xiaoyuan, and the granddaughter of Wang Zhen, Wang Jingjing. Deng Rong and Deng Zhifang didn’t respond to questions sent by fax to their respective offices in Beijing. Liu couldn’t be reached for comment through one of the companies with which she’s associated. Wang Jingjing didn’t respond to questions couriered to her office in the Chinese capital and a reporter who visited on two occasions was told she wasn’t there. Heirs of Mao’s Comrades Rise as New Capitalist Nobility [Bloomberg News]