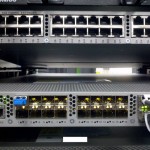 Cisco Nexus switches. pchow98 Six months ago, Facebook announced that its Open Compute Project (OCP) would develop a top-of-rack switch that could boot nearly any type of networking software. With the help of Intel, Broadcom, and others, the consortium devoted to open hardware specifications would develop a rival to Cisco’s network hardware. Today, Facebook and friends described the first tangible steps they’ve taken toward reaching that goal. Intel, Broadcom, Mellanox, and Cumulus Networks have contributed specs and software that bring the Open Compute Project closer to a finished switch design. Frank Frankovsky, VP of hardware design and supply chain operations at Facebook and head of the Open Compute Project, announced the latest developments in a blog post and conference call with reporters today. Frankovsky says the project is on track to “help software-defined networking continue to evolve and flourish,” since open source software-defined networking systems could be installed on Open Compute switches. Read 11 remaining paragraphs | Comments

Marriott plans to bring Netflix to your hotel room TV