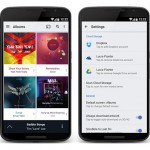 DoubleTwist has released a media player separate from its main product, and this one can stream music straight from various cloud services. Aptly named CloudPlayer, the app links to your Dropbox, OneDrive and Google Drive accounts all at once to access any music files you’ve uploaded. The company says it “created CloudPlayer to provide an alternative to crippled, proprietary cloud music lockers that impose painful restrictions on what you can do with the music you own.” Unlike other services (company co-founder Jon Lech Johansen specifically targets Google Play Music in his blog post), DoubleTwist claims CloudPlayer doesn’t have a download or a device restriction, and it supports lossless audio. You can also choose songs and playlists to save for offline playback on the app. Finally, the media player can stream music through Chromecast and AirPlay devices (such as Apple TV), though you’ll have to shell out $5 for the feature as an in-app purchase. Otherwise, the app is free and up right now on Google Play — DoubleTwist says it’s “launching on Android first, ” so the player might head to other platforms in the future. A quick glance at the early reviews, however, shows that it’s having issues detecting music from OneDrive. The company says it’s a “bug with Microsoft’s OneDrive API, ” and it’s already taking steps to fix the problem. Filed under: Misc , Mobile Comments Via: Jon Lech Johansen’s blog Source: doubleTwist

More:
CloudPlayer streams your music from Dropbox and Google Drive

BlueCross BlueShield hack may have exposed data for 10 million customers

7-Eleven delivers 77 packages via drone in first month of routine...