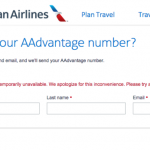 American Airlines’ information systems outage is affecting its website as well as flights. An information systems outage at Chicago’s O’Hare International has grounded many American Airlines flights today. As the company tries to restore service, flights from at least three major hub airports—O’Hare, Dallas-Fort Worth, and Miami—are on a “ground stop” because of the problem. At 1:32pm Eastern Time, the Federal Aviation Administration announced that American had requested a ground stop for flights out of the three airports: FAA Air Traffic Alert: @AmericanAir requested a ground stop for all of their traffic in and out of DFW/ORD/MIA due to their computer issue. — The FAA (@FAANews) September 17, 2015 During the issue, American’s Twitter feed was filling up with responses to customers: “We’re working to resolve technical issues and apologize for the inconvenience.” Some of the complaints had nothing to do specifically with the grounded flights, however—it appears the outage has also affected parts of American’s website, blocking access to frequent flyer accounts and other customer data. Read 1 remaining paragraphs | Comments