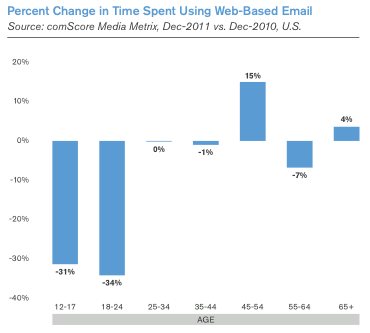 ComScore released its annual US Digital Future in Focus report this week, offering a year-end wrap of many of the trends its tracked throughout the past year and a look towards the next. One of the more telling stats concerns email use among those in their teens and twenties. According to the report, web-based email use among 12-17 year olds dropped 31 percent in the past year, while use among those 18 to 24 saw an even bigger drop of 34 percent. Some of that can no doubt be attributed to Facebook and other email alternatives, but a big factor is the growth of email use on mobile devices; both of those age groups saw double-digit growth in that respect, with mobile email use jumping 32 percent among 18 to 24 year olds.

In terms of sheer growth in the past couple of years, though, there’s not much that matches the trajectory of tablets (obviously aided by one in particular). ComScore notes that that US tablet sales over the past two years have topped 40 million, a figure that it took smartphones as a category a full seven years to reach. Another area that saw some considerable growth in 2011 is digital downloads and subscriptions (including e-books), which jumped 26 percent compared to the previous year, leading all other areas of e-commerce. The full report and some videos of the highlights can be found at the source link below.

ComScore report finds drastic shift from web-based to mobile email among younger users in past year originally appeared on Engadget on Sat, 11 Feb 2012 13:12:00 EDT. Please see our terms for use of feeds.