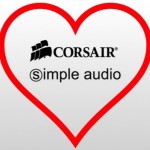 Scotland-based Simple Audio announced today that it has been acquired by American computer component maker Corsair . T he five-year-old audio firm is best known in Europe for its networked set-top receivers, which are capable of sharing music from PCs, Macs, TVs, iPods and MP3 players . In an effort to expand its reach, Simple Audio hopes that this multi-million dollar deal will help bring its products stateside sometime this year. While there’s no word how many doubloons Corsair shelled out, the company stated that it had been eyeing Simple Audio since 2010 and felt that it was the right time to make a move. To take a closer look at this acquisition, click through to the press release after the break. Filed under: Home Entertainment , Networking Comments Source: Simple Audio