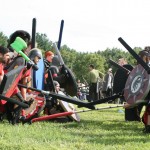 Armies face off during a bridge battle at Bellus Aeternum II in Upper Marlboro, Maryland. Jonah Gallagher PATUXENT RIVER STATE PARK, Maryland—For four days, the Darkon Wargaming Club took over a section of a park outside Upper Marlboro that once served as a grass airfield. Temporarily, it became a combination of festival encampment and battleground. The event was the second edition of Bellum Aeternuthe club’s invitational event for live-action role-play (LARP) and combat, open to participants from across the medieval-themed LARP community. As I described in my feature on the first Bellum Aeternus last November , Darkon is a live-action combination of fantasy tabletop role-play (like Dungeons and Dragons ) and wargaming (like Warhammer ), combining a full-contact battle sport with a strategic land warfare game and scenario-driven adventures. Darkon is an offshoot of the “boffer” combat gaming community that originally sprung up in Maryland, Washington DC, and Northern Virginia. Unlike the Society for Creative Anachronism’s armored combat , Darkon and similar combat games use padded weapons for safety and to allow unarmored (and occasionally barely dressed) participants. Unlike Dagorhir , from which Darkon and most of the other US fantasy combat LARP games evolved, Darkon incorporates a magic system that has spellcasters throwing beanbag “fireballs” and “lightning bolts” in combat. Participants also use other magic to avoid taking hits in battle or rendering opponents’ defenses useless. And unlike Amtgard, another fantasy LARP, Darkon allows for some serious full-contact combat—using tactics such as “shield bashing” to knock opponents over and allowing the use of bows with pad-tipped arrows. The combination of archers and spellcasters drives some of those from other, larger game communities to distraction. It changes the balance of the combat game from pure martial beatdown to one where players with a wide range of physical abilities can take part. Read 3 remaining paragraphs | Comments