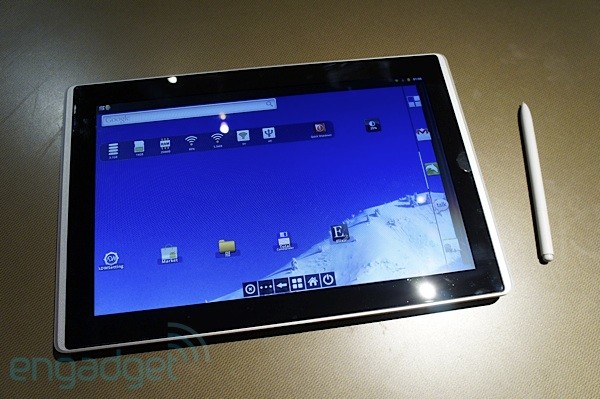 Remember CUPP Computing‘s PunkThis board we played with at Computex 2011? It’s now left the confines of its 2.5-inch hard drive form-factor and jumped ship from a standard Asus netbook to a Core i5-equipped Eee Slate EP121, taking residence alongside the tablet’s battery. As a refresher, PunkThis puts a complete ARM-based system into an x86 computer by replacing the SATA HDD with a single core 1GHz Texas Instruments OMAP 3730 processor, 512MB RAM and WiFi, along with a mini-PCIe socket for SSD storage, plus connectors for the host’s video, audio and USB interfaces. While CUPP computing is still working hard to make PunkThis commercially available for tech-savvy individuals, it acquired Israeli security company Yoggie last July and built this demo machine to attract another kind of customer.

The tablet we tested was running Windows 7 Home Premium and Android 2.3.4 simultaneously, and was equipped with an additional button for switching between x86 and ARM modes. Since the Asus EP121 already uses a mini-PCIe SSD instead of 2.5-inch SATA storage, a prototype PunkThis board was designed to fit alongside a modified battery. Gingerbread didn’t break a sweat supporting both the 1280×800-pixel capacitive touchscreen and pen-based Wacom digitizer thanks to some additional hardware and software tweaks. Beyond the ability to switch between Windows for heavy lifting and Android for improved battery life, it’s possible to use both x86 and ARM side-by-side. Imagine antivirus and firewall software running on the PunkThis board in mission-critical security applications for enterprise, and it’s easy to see where CUPP Computing is going with this. Check out the gallery below and our hands-on video after the break.

CUPP’s PunkThis graduates to tablets, earns a degree in security (hands-on video) originally appeared on Engadget on Mon, 26 Dec 2011 07:21:00 EDT. Please see our terms for use of feeds.