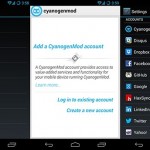 Good news is now at hand for CyanogenMod fans who like a bit of stability in their lives, because the general release builds of CyanogenMod 10.1.3 are now hitting server mirrors. As a nice bonus, support for CM Account is baked into this release (previously available only in the 10.2 nightlies), which allows users to locate and remotely wipe their missing devices — a feature that’s awfully similar to Android Device Manager . If all goes according to plans, CyanogenMod 10.1.3 will be the last of the Android 4.2-based builds, as the team is now investing the bulk of its work on CyanogenMod 10.2, which is based on Android 4.3. Once you have the latest version, perhaps you’ll consider pairing it with the impressive Focal camera app. Filed under: Software , Mobile Comments Source: CyanogenMod (Google+)